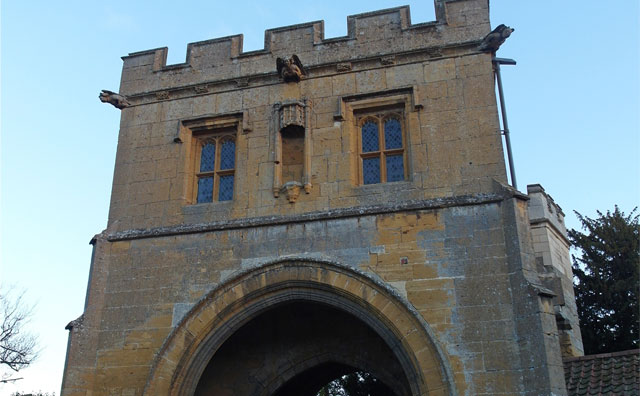 In January 1539, on the orders of King Henry VIII, the Abbot of Tewkesbury and the monks of his Chapter accepted the dissolution of their monastery and surrendered their property. The buildings of the great Benedictine Abbey were divided by the administrators (“the King’s Visitors”) into two categories: “superstitious buildings to be destroyed” and those that were “convenient to be preserved”.

The abbey church fell into the former group but was rescued by the townspeople, who declared that it was their only parish church; accordingly it was transferred to them for the value of its lead and bells – £483. The other “superstitious” buildings were demolished.

The second group consisted of domestic and agricultural buildings that could foreseeably come in useful to a new owner. These included not only the Abbey’s kitchen, pantry, bakehouse, brewhouse, stables, slaughterhouse and barns, but also the buildings called the Newark (the “new work” dating from about 1500, which were incorporated with the Abbot’s lodging to form what is now the Abbey House) and the “great gate entering the court, with the lodging over the same”. Although a gatehouse must have stood in this position for centuries, in 1540 the one that survives today was relatively new. Stylistic details indicate that it was probably built either just before or soon after 1500. The upper chamber served as a lodging, probably for one of the officers of the Abbey, lay or monastic, or perhaps one of the “guests” who crowded many abbeys of the time (elderly benefactors who looked on it rather like an old people’s home). But little is known of its functions after the closure of the Abbey: such buildings were often used for parochial or manorial purposes, perhaps as a courtroom or a lock-up, but there is no written record of how the Gatehouse was used during this period.

Engravings of the late 18th century show that it was by then a roofless ruin, and it remained so until about 1849. The 19th-century Age of Restoration was just beginning, and the then owner John Martin, a Ledbury man who was M.P. for Tewkesbury, courageously undertook its rescue. Under the careful direction of the architect James Medland, undesirable outbuildings were removed, and much of the masonry of the walls was taken down and rebuilt, the stones being replaced precisely in their former positions. A new carved timber roof with stone corbels and new lead was provided, the vault over the gate passage was rebuilt, and a few years later the massive oak doors were set in place.

After its restoration the Gatehouse seems to have settled back into its previous ornamental but empty existence, serving as a rather grand lodge to Abbey House. The latter was given a new south front in 1825, together with “alterations which modern ideas of comfort could not fail to suggest” and later became the Vicarage. The Gatehouse was thereafter put to various parish uses: the Girl Guides met there, and at one time an artist used it as a studio. It was reroofed again in the 1970s, after which a new occupier was sought, but the awkward access up the narrow winding stairs to the upper room made this difficult (as it must always have done).

Then a neighbour of the Gatehouse suggested that the Landmark Trust might be interested in it; she knew that difficulty of access would not deter it from taking on a good building – and she was right. A lease was duly negotiated, and Landmark took over the Gatehouse in 198