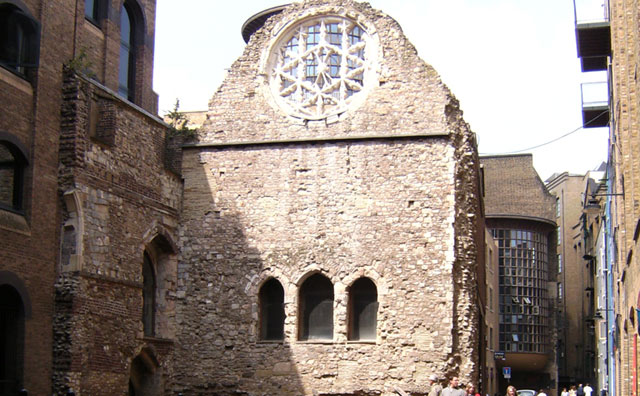 Winchester Palace was a twelfth century palace, London residence of the Bishops of Winchester. It is located south of the River Thames in Southwark, near the medieval priory which today has become Southwark Cathedral. Southwark was the largest town in the old diocese of Winchester and the bishop was a major landowner in the area. He was also a power in the land (Winchester being the old Saxon capital), and regularly needed to be in London on royal or administrative state business. For that purpose, Henry of Blois built the palace as his comfortable and high-status London residence.

The palace remained in use until the 17th century, when it was divided into tenements and warehouses, but was mostly destroyed by fire in 1814. Part of the great hall, and the west gable end with its rose window became more visible after a 19th century fire and 20th century redevelopment. It is believed that the great hall was built c.1136 and that the rose window was added 200 years later. The hall had a vaulted cellar below with direct access to the river wharf for bringing in wares, and was richly decorated. It often entertained royal visitors, including James I of Scotland on his wedding to Joan Beaufort (niece of the then bishop, Cardinal Henry Beaufort) in 1424.
The rest of the palace was arranged around 2 courtyards, and included a prison, brewhouse and butchery as well as a tennis court, bowling alley and pleasure gardens for the Bishop.

Associated with the palace were the Clink prison (whence our phrase "in the clink"); and the "Winchester geese" — London’s prostitutes who, banned in the City itself (north of the river), lived in Southwark under the bishop’s regulation.

It is a Scheduled Ancient Monument managed by English Heritage.