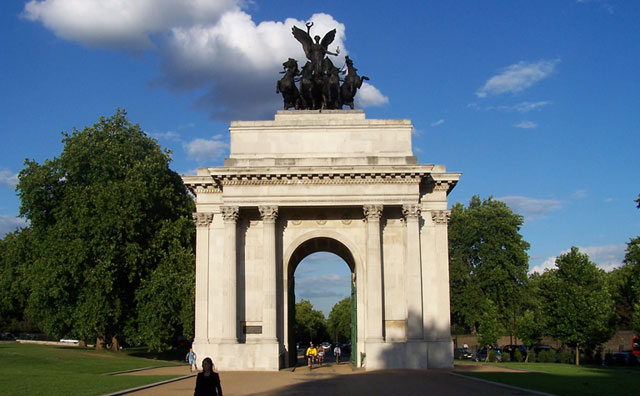 Wellington Arch, also known as Constitution Arch or (originally) the Green Park Arch, is a triumphal arch located to the south of Hyde Park in central London and at the north western corner of Green Park (although it is now isolated on a traffic island between a modern road system which encircles this corner). The arch, and Marble Arch to the north of Hyde Park, were both planned in 1825 by George IV to commemorate Britain’s victories in the Napoleonic Wars. The Wellington Arch was also conceived as an outer gateway to Constitution Hill and therefore a grand entrance into central London from the west. The presence of a turnpike gate at this point had led, in the eighteenth century, to a strong perception that this was the beginning of London (reflected in the nickname for Apsley House as "No 1, London") and the Arch was intended to reflect the importance of the position.

The Wellington Arch was built between 1826-1830 to a design by Decimus Burton. Much of the intended exterior ornamentation was omitted as a cost-saving exercise after the King’s overspending on the refurbishment of Buckingham Palace, which was underway at the same time. The arch originally stood almost directly opposite Apsley House, a short distance from, and at a right-angles to, its present location. It faced the screen, also designed by Decimus Burton, and still in its original location, which forms the Hyde Park Corner entrance to Hyde Park. It was intended to form part of a grand ceremonial route towards Buckingham Palace.

In 1846 the Arch was selected as a suitable location for a statue of Sir Arthur Wellesley, 1st Duke of Wellington, soldier and Prime Minister. The Wellington Statue by Matthew Cotes Wyatt which eventually crowned the arch was 8.5m high, the largest equestrian figure ever made. It was so enormous that it generated considerable controversy and ridicule at the time. When a decision was taken to remove it, the Duke of Wellington threatened to resign all his official appointments, and so it was left in place, and remained there throughout the remainder of the Iron Duke’s lifetime.

In 1882-3, the arch was moved a short distance to its present location on Hyde Park Corner to facilitate a road widening scheme. In the new location it lost its original relationship to the entrance of Hyde Park, but it acquired a new position as the entrance to Constitution Hill. It is today in the centre of a large traffic island which has been claimed from what was the western tip of Green Park.

The Wellington Statue was removed to Aldershot at the same time and was eventually replaced, in 1912, by a huge bronze quadriga designed by Adrian Jones. It is based on a smaller original which caught the eye of Edward VII at a Royal Academy exhibition. The sculpture depicts the angel of peace descending on the chariot of war. The face of the charioteer leading the quadriga is that of a small boy (actually the son of Lord Michelham, the man who funded the sculpture). The statue is the largest bronze sculpture in Europe.

The arch is hollow inside, and until 1992 housed the second smallest police station in London (the smallest being in Trafalgar Square). Transferred to the ownership of English Heritage in 1999, it is now open to the public and contains three floors of exhibits detailing the history of the arch and some of its uses. Visitors can also step onto terraces on both sides of the top of the arch, which give very good views of Hyde Park Corner, Hyde Park, the junction of Park Lane and Piccadilly, Green Park, Constitution Hill and even glimpses of the private gardens of Buckingham Palace.