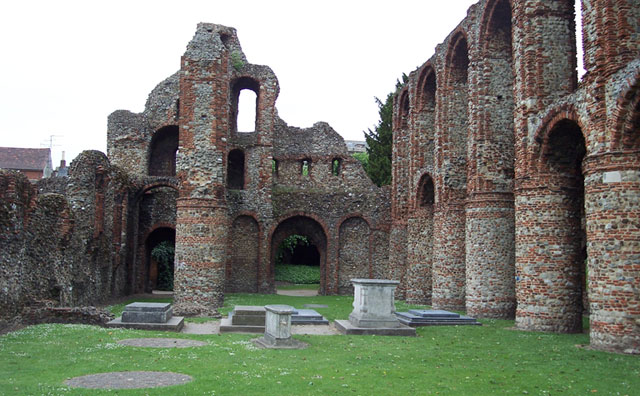 St Botolph’s Priory, located in Colchester, England, was the first English Augustinian priory church, founded at the end of the eleventh century from the Anglo-Saxon minster community of Colchester. Only the ruined remains of the nave survive today, under the care of English Heritage.
St. Botolph’s never achieved fame through a library and scriptorium or attracted pilgrims through possession of miraculous relics. At the Dissolution of the Monasteries, the priory buildings passed to secular owners but the priory church (illustrated) passed into the care of the parish, and served as a parish church.

The former exterior plaster has weathered away, revealing the flints and reused Roman bricks of which the priory was constructed; Essex is a region devoid of building stone.

In recent years the priory has become freqented by local winos and drifters, often putting off tourists from the historic site.