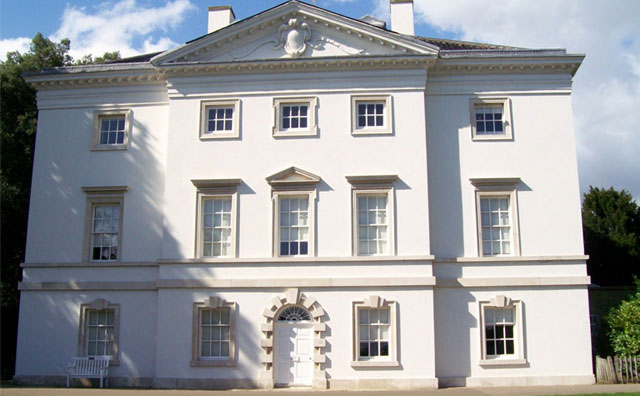 Marble Hill House is a Palladian villa on the River Thames in southwest London, situated halfway between Richmond and Twickenham. The architect was Roger Morris, who collaborated with Henry Herbert, Earl of Pembroke, one of the "architect earls", in adapting a more expansive design by Colen Campbell.
Marble Hill House was built in 1724-1729 for Henrietta Howard, Countess of Suffolk, the mistress of King George II. It is set in 66 acres (2.67 km²) of parkland, the Marble Hill Park. The Great Room has five architectural capricci by Giovanni Paolo Pannini and lavishly gilded decoration. The Marble Hill house also hosts a collection of early Georgian furniture and paintings as well as the Lazenby Bequest Chinoiserie collection.

Both Alexander Pope and Jonathan Swift spent many happy hours at Marble Hill as Henrietta Howard’s guests. Marble Hill House was widely known through engravings; its compact plan and tightly controlled elevations, after the interval of a generation, furnished a standard model for the English villas built throughout the Thames valley and further afield, as well as a model for plantation houses in the American colonies, where such a house was a "mansion".

One of the capricci by Giovanni Paolo Pannini
The house is now owned by English Heritage, which acquired it upon the abolition of the Greater London Council in 1986. The house along with its extensive grounds are known as Marble Hill Park and provide many modern facilities including a cricket pitch and nets, tennis courts, putting green and a children’s play area.

Hammerton’s Ferry links the gardens to Ham House on the opposite bank of the river.