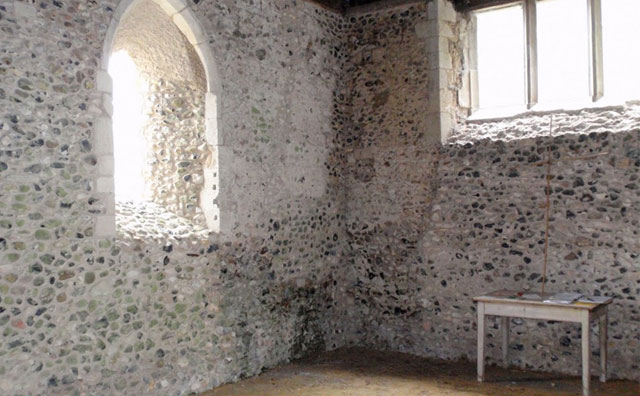 The chapel was almost certainly built to serve the nearby Castle of Lindsey, the earthwork remains of which are visible some 250 metres to the south-east, and it was probably founded by the de Cockfield family.

In 1240 Nesta de Cockfield gave the churches of Kersey and Lindsey to Kersey Priory, but reserved the right to appoint the clergy for Lindsey, all of which suggests the present chapel was well established by that time. In 1242 she imposed a special tithe on parts of Cockfield – known as the Lindsey Tithes – to sustain continual lighting in the chapel.

Lindsey Castle appears to have been abandoned before the end of the 13th century but St James’s Chapel continued in use. The manor and the right to appoint the warden of the chapel eventually passed to the Sampson family who appointed wardens in 1375, 1400 and 1408.

Late in the 15th or early in the 16th century the chapel was repaired, and perhaps shortened, and the existing roof replaced the previous higher one. It remained in use until the Dissolution, though in somewhat reduced circumstances.

In 1547 the King’s Commissioners reported that its yearly value was £5, and it was one of the numerous ‘free’ chapels that were dissolved the same year. The king eventually granted the chapel to Thomas Turner and thereafter it was used as a barn until 1930.