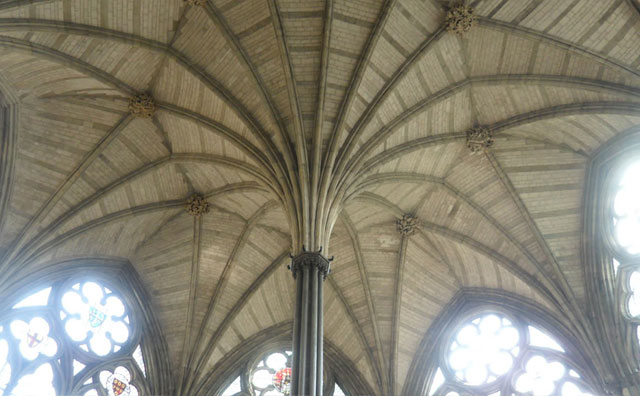 The Chapter house was built concurrently with the east parts of the abbey under Henry III, between about 1245 and 1253. It was restored by Sir Gilbert Scott in 1872. The entrance is approached from the east cloister walk and includes a double doorway with a large tympanum above.

Inner and outer vestibules lead to the octagonal chapter house, which is of exceptional architectural purity. It is built in a Geometrical Gothic style with an octagonal crypt below. A pier of eight shafts carries the vaulted ceiling. To the sides are blind arcading, remains of 14th century paintings and numerous stone benches above which are innovatory large 4-light quatre-foiled windows. These are virtually contemporary with Le Sainte Chapelle, Paris. The chapter house has an original mid-13th century tiled pavement. A door within the vestibule dates from around 1050 and is believed to be the oldest in England. The exterior includes flying buttresses added in the 14th century and a leaded tent-lantern roof on an iron frame designed by Scott. The Chapter house was originally used in the 13th century by Benedictine monks for daily meetings. It later became a meeting place of the King’s Great Council and the Commons, predecessors of Parliament.

The Pyx Chamber formed the undercroft of the monks’ dormitory. It dates to the late 11th century and was used as a monastic and royal treasury. The outer walls and circular piers are of 11th century date, several of the capitals were enriched in the 12th century and the stone altar added in the 13th century. The term ‘pyx’ refers to the boxwood chest in which coins were held and presented to a jury during the Trial of the Pyx, in which newly minted coins were presented to ensure they conformed to the required standards.

The Chapter house and Pyx Chamber at Westminster Abbey are in the guardianship of English Heritage, but under the care and management of the Dean and Chapter of Westminster. This arrangement is seen by some as a deliberate ploy to secure unwarranted funding since it is doubtful that the Abbey, when considered as a whole, would meet the criteria for substantial English Heritage funding. During the last year, English Heritage have funded a major programme of work on the Chapter, comprising repairs to the roof, gutters, stonework on the elevations and flying buttresses, and repairs to the lead light.